A Life in Motorcycling

My life began with motorcycles. My father, uncles, cousins and their friends were all motorcycle riders and racers. They mainly competed in scrambles, but were tough competitors in all disciplines of the sport including road racing solos, sidecars, speedway, observed trials, time trials even record speed attempts. My father Lew, still a player at the game at 84 years old in 2006, with many motorcycles and a long race history, is planning to come out of retirement to compete for the 41st time in the 24 hour reliability trial. My late cousin Jim, multiple state champion had to jump from his out of control Vincent at 140mph whilst attempting a land speed record attempt at Lake Eyre in the 60s. Until recently, the bike was still as it was after that attempt.

From an early age, I attended all forms of competition and travelling on motorcycles. From the early days of Mallala prior to its closure in the early 70s, I remember sitting pillion on my fathers 650cc Tribsa in the early 60s and riding through the morning mist on the roads from Two Wells to Mallala. Then the adrenaline rush. Once reaching the old entrance gate by the officers mess at the circuit and greeted by the noise and activity of the day beginning. Cars, bikes, the rush of riders and mechanics preparing for the racing of the day. Still, I was only 10 years old. The crowd building. In the thousands now, but far surpasses those of our most current race meetings. My first job was here where I regular flag marshalled at motorcycle events, which ran from early morning until about 11:30am when CAMS took over for the afternoon car racing events. Most of my time was flagging at Woodroofes corner, now more commonly known as Turn 7. Another corner was where the Aircraft Tower stood at Turn 1, known then as Tower Corner. Here you would look directly across the track to view the aircraft shelter which stood before you next to the pits positioned in the centre of the circuit.

From here on, life was always motorcycles, whether watching family members compete and regularly winning, viewing other motorcycle events or competing myself. I competed mainly in 24 hour trials as passenger with my father, or solo in this and other time trials or scrambles events. My life of road riding was regularly racing my friends to the limit on public roads on my trail bike. In those days, I always pushed myself to the limit, even by myself. I had a regular viewer at Findon where Shane Bowes (top speedway racer in the 1990s and son of Len Bowes, international Sidecar Speedway Champion) would sit out front and wait for me to scream around the tight S bend in front of his home every night scraping the foot pegs. However, road racing never presented itself to me until a friend was invited to race as a sidecar passenger for a meeting at AIR. Unfortunately, he had to decline due to work commitments that weekend so he gave the rider my number to see if I was interested. I agreed without hesitation. This rider was Mal Evans, well known, liked and a top sidecar road racer.

Mal took me to the Phoenix clubs last meeting at the Fountain Inn Hotel at Parkside. Never had I been to a club meeting where so many people crowded every room of the hotel, especially on a Tuesday night. The Club then moved to the Prince Albert Hotel where membership growth continued , often spilling out onto the streets at meetings. Many times as I recall the publican of the time, after closing up at midnight, would lock the doors and a group of us regulars would continue to drink on until 3am at no charge. The free food platters supplied by the publican every meeting for the members was always a fantastic added bonus for those who hadnt had dinner.

While continuing to race as sidecar passenger in the late 70s and early 80s, I began racing solo. Beginning on an RD400 at the Collingrove Hillclimb (last motorcycle meeting held) and AIR, I purchased a superbike of the time, a Honda CB900FZ. I raced this in my first year and was upgraded to B grade. My second year, while still continuing to race as a sidecar passenger at state and national level, I raced for the Trevena Honda race team on a privately purchased CB750FB. With this I did reasonably well against the larger capacity bikes I was competing against and also won the SA Sidecar title with Mal Evans as passenger. My solo results must have been good enough as I was shifted to A grade, being the first person ever being lifted to this grade on this production capacity of equipment and after less than two years of solo road racing.

I was forced to give up racing sidecars due to sponsorship pressures in the early 80s but continued to be part of the total race fraternity. My solo career also ended in 1985 to concentrate more on family life. My darkest moment however was to the death of my dear friend Mal Evans after he crashed at Bathurst in 1986.

Throughout my time in the Phoenix club, I have found friendship with an enormous range of people, many of whom I still remain close to today. Through the years I have held positions in the club as social secretary, MSA delegate and other committee roles and am currently the club President. In 2006 the club continues to run a racing and social events for all age groups. The current membership and committee is made up of true supporters of the Phoenix MCC. My full support and thanks to them all for the help and efforts that they continue to provide. 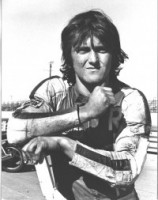