A LIFE OF TRIUMPH

‘To understand Murray Johnson’s business, you have to understand that he operates out of the ultimate man cave,” says his partner of 34 years, Jo-Ann Johnson. “It hasn’t seen a vacuum cleaner in years and you’re surrounded by boys’ stuff.”

As she talks, Murray just gives an innocent half-smile, the look that probably got him out of a lot of trouble as a kid. 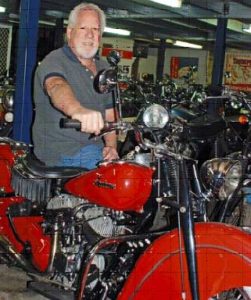 We are standing in horizontal rain beside a football oval in the Adelaide Hills. The occasion is a fundraiser for the Johnsons’ son-in-law, Shane Gaghan, who’s planning another Bonneville assault on his self-built, turbocharged, Suzuki GSX-R750. There’s a cross-section of local diehard motorcycle fans milling around and most of them seem to know Murray.

A few days later I’m sitting in that so-called “man cave”. There is a constant stream of customers who seem just as content poking about the dozens of motorcycles and through the rows of old, reclaimed parts as they are about actually buying something.

On the edge of this cavern-like wrecking yard of bikes and parts is Murray’s office. We kick back in a couple of moth-eaten easy chairs and he talks about how he got into all this. As much as this story is about the bikes and parts he sells, it’s also about talking to a guy who has lived the entire motorcycle experience for more than four decades.

“I grew up in suburban Adelaide and first became aware of motorcycles when I saw the local hero on his Triumph,” he says.

“I ran down the alleyway to watch him take off and when he hit top gear and opened the throttle that sound changed my life forever.”

Naturally, Murray’s first bike was a Triumph – a ratty old 1956 Thunderbird. “I had to learn fast how to fix it,” he says. “I was able to pull it apart and then get it running again but it never lasted very long.”

Soon after, Murray had a similar experience to that first Triumph epiphany aboard a friend’s then-new Norton Commando. “As you opened the throttle it seemed to give endless power and it was so smooth,” he says.

But by then Honda fours were becoming the weapon of choice for go-fast fans (a combination of power and minimal vibration) and, in 1973, Murray bought a 750. That too changed his life.

Murray was talked into joining a practice session at Adelaide International Raceway by a racer friend-of-a-friend. It left such an impression that, in 1974, he entered his first race.

“I turned my roadbike into a racebike by pulling off the headlight and mirrors and put on a four-into-one exhaust. Then I fitted a 900cc kit from Japan.”

After a year he progressed to a TZ Yamaha and joined the wave of young South Australian racers travelling around the south-eastern states. Murray fondly recalls races at Bathurst, Sandown and Amaroo Park in 1975 on a 900cc Kawasaki. By 1976 he was an A-grade rider and highlights 1974 to ’79 as his most active period.

“I was too cheap to consider racing overseas; I suppose you’d say I was a budget racer,” he says. “Not many people tried to make tyres last four meetings on a TZ.”

Murray gave up racing in 1983 around the time his children, Donna and David, were born but then he discovered classic racing in 1987.

One was spending months away in the US buying up container loads of Harleys, British bikes and parts. The other was raising a family and running a motorcycle shop in Adelaide with an old friend, Kym Dier.

K&M began in a small shop in West Croydon after quickly outgrowing the spare room in Kym’s house. The business became a full-time proposition.

Persistence would become the foundation for K&M’s success. The early ’80s were the embryonic days of the British classic revival and Murray and Kym soon identified a demand for quality New Old Stock (NOS).

The pair was among the first to trek over to the US to check out what was there.

That was in 1983 and everything was done over the phone. Murray recalls visiting his local library and researching areas of America’s Midwest where they would mostly go. He’d then go by the post office to troll through American phone directories to locate bike suppliers and local dealers.

“We started off filling one crate, then it was a 20ft container but, within a few years, we were packing up to five 40ft containers a year,” Murray says. They’d be away for up to six weeks, driving 12,000 miles up and down the Midwest, from Texas to Michigan.

Their hard work paid off and K&M eventually became the leading importer of British motorcycles and NOS parts in Australia.

“It wasn’t our intention to be wholesalers but we found ourselves able to fill the gap with other British specialist shops in Australia and New Zealand,” Murray says.

When Kym decided to pursue other interests, Ray Renwood joined Murray and, together, they witnessed an explosion of demand for British bikes and parts for the next decade.

Murray and Ray were constantly in the US on buying trips and had built up a network of spotters and contacts to help dig for gems.

In the 1960s the US was the British motorcycle manufacturers’ biggest market with dealers in every major town.

The American trend of buying the latest, then trading it in on next year’s model, fuelled a sales explosion. Now all those older bikes were lying around in barns, out the back of grimy motorcycle shops and even piled 10m high in the paddocks of wrecking yards.

“What used to be discarded was now being sought out,” Murray says of those early days.

The hoarders were another experience.

“I always get a laugh out of watching the TV show American Pickers because that’s what a lot of our experiences in the ’States were like,” says Murray. “There are a lot of inveterate collectors out in the Midwest and once you’ve established an honest, working relationship you keep going back.”

Each of those trips was an adventure, involving driving a Ford or Chevy van up to 1200 miles a day collecting bikes and parts to pack into another container. Another was driving for two days, buying bikes in temperatures as low as -25°C.

Murray’s also seen the effects of a tornado in Oklahoma where he swerved around a shed as it violently tumbled across the middle of the highway.

Murray decided to call it a day in 2006 after two decades of travelling, dealing, transporting and selling.

“We sold K&M [it still runs as a sales and repair centre for British and American motorcycles] and I spent a year walking around in circles,” he says.

The man was missing his cave. He turned his life support back on by setting up Murray’s Britbikes in a huge warehouse across the road from K&M.

Most of Murray’s stock is good used parts along with some NOS parts that he’s accumulated over the years, most of which buyers have to pick through.

“It’s just supposed to be a three-day-a-week thing but, to be honest, I really do live and dream about it. Jo-Ann seems to understand, thank heavens.”

“I think I’m transcending into retirement by selling parts,” Murray says with a faraway look, but he’s still buying up any New Old Stock people have.

We finish our talk by walking around the rows of bikes and parts. There are several Indians among a sea of original and restored British bikes. Why? “I’ve always liked the exotic old bikes but could never afford the dream bikes of the era. Now I can afford a landmark motorcycle or two, such as an Indian Chief.”

The British bikes range from a BSA Victor scrambler in ‘fixer-upper’ form to a row of Triumphs that trace the late ’60s year by year, model by model. Nearby are BSA twins from the 1960s and ’70s and several Norton Commandos, including an electric-start model.

Some bikes are fully restored, such as a beautiful 1969 BSA Firebird Scrambler. Others are in original, low-mileage form, such as the 1970 Triumph Bonneville Murray sold, then bought back.

It sits with faded paint but looks completely original and has just a few thousand miles on its speedo. “That’s a bike I may never sell. It’s irreplaceable. If you restore something like this I believe you actually devalue it,” Murray says.

Upstairs on several mezzanine levels are rows of engines, racks of forks, shelves laden with petrol tanks and seats. Exhausts hang like skinny mummies from an ancient Egyptian tomb, wrapped in their original greaseproof paper.

A close examination of a pile of old Norton Dominator twin crankcases reveals they are surprisingly low-mileage. The conrods have no nicks or heat stains on them and thread holes are in perfect condition. But they are coated in old engine oil and lie forgotten in a corner.

I’m starting to get lost in a wall of wheels as I keep an eye out for a good 1966 rear hub. Murray earlier said he could only spare a short time for the interview as he’s off to the Isle of Man TT. So it’s game over for me.

Murray and Jo-Ann flew over to watch their UK-based son, David, race in several classes. David was the pilot of the Ace Café Triumph Daytona 675R in the Supersport class.

So Murray had done it again. There’s always a Triumph in his life, somewhere.